The Fourth exhibit at The Monks Gallery. 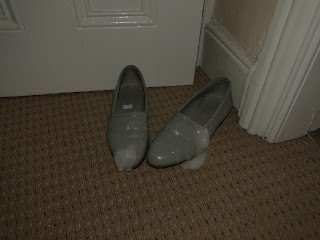 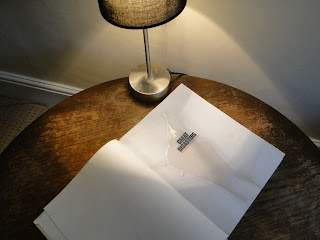 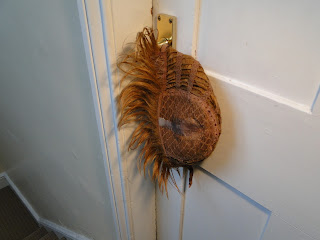 LittleWhitehead
The Relief Series, 2011, Mixed Media
We made the works whilst working with silicon rubber on a different piece. We then had a lot of objects we thought would be funny to wank over. The works are not only extremely self-deprecating, but hopefully they can provoke some peculiar, absurd narrative. 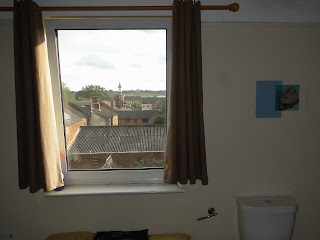 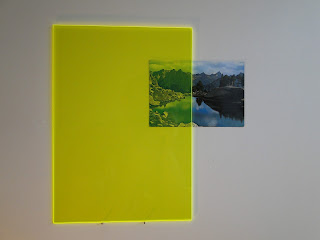 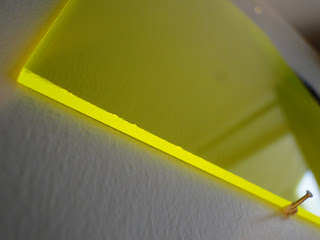 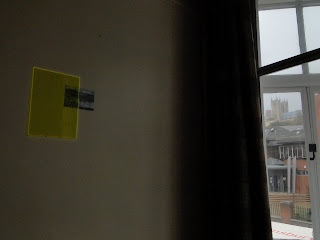 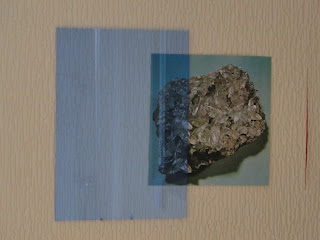 Fiona Curran
Its hard to get lost when you don’t know where you’re going, 2010, Postcard and perspex (Yellow)
A small, good thing, 2011, Postcard and perspex (Blue)
Fiona Curran’s works conjure up moments of spatial precariousness. Exploring shifting notions of the natural and artificial, utopia and dystopia and the effects of technology via our exposure to the screened image, Curran focuses on surface, materiality and the mapping of space. Using geometric and repetitive forms to explore boundaries and edge, considering how angles contend with and counterbalance one another in shifting spatial planes and using collaged forms to introduce a surface disparity are all key processes. Found landscape images referencing real spaces and sites sit alongside more formal, abstract works that engage with unseen but, what might be referred to as, sensed geographies. Objects and forms are broken down and reassembled as paintings become sculptures that become paintings once again; existing works are re-placed and dis-located through new configurations and assemblages of value. 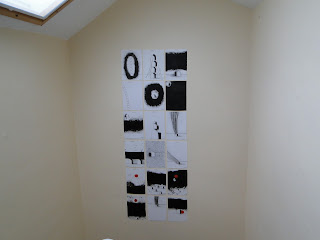 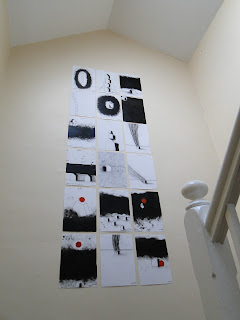 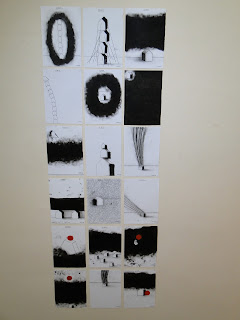 Phill Hopkins
Untitled (eighteen drawings), 2011, Mixed Media
I am a worrier.
I was taught at Goldsmiths to look and find meaning in everything: the materials I used, the themes I worked with and the essence of the finished item.
That’s hard work.
Of late, I have been trying to teach myself not to worry about this meaning; not trying or even attempting
to pin down what something might be or is. I am practising to let go of this. I am busy with making.
I am comfortable to say that I deal with real things. I chase elusive experience in an obsessive manner.
I work from memory, which can be very recent or from the past. I am sure that memory will, in some form, eventually come. It may be instant or it may come and go, bit by bit.
I have been using materials / found materials / ideas in a similar way.
These can all be of a limited supply; I have discovered materials that I have horded, which means that if I use them they will eventually run out / Found materials are difficult to find again / A certain idea or motif may not last for very long – I consume or use things up very quickly.
As a child I had lots of crazes: birdwatcher, pigeon racer, gardener, explorer, actor, entrepreneur, rugby player, artist, chef, barman, teacher, stamp collector, writer, weight lifter…I am once again realising the potency of this approach; fads are a necessity for trying to figure out the world (both inner and external) and how to respond to it.
Possibly the house motif that I have been using again is that of the house that I grew up in. It is more about the feel of that shape that I am interested in and that engages me. It is a motif that I have used before and it has reappeared again.
It is blank or silent and has the possibility to carry or hold; it is potent.
The motif is repeated over and over and over again, in drawings and in sculpture.
I draw constantly, it comes very easy to me it always has done.
Everything comes from drawing; it is how I tether things.
Whatever, I draw it first - I hear something, I draw it; I read something, I draw it; I see something, I draw it; I think something, I draw it.
Lately I have been making work after the Japanese earthquake and tsunami in Fukushima. I have been collecting feathers and bits of rope and string.
I have been connecting the cloud that arose from the Fukushima power station with the feathers that I have found in the park and on a beach.
Graveyards are good places for finding black feathers. 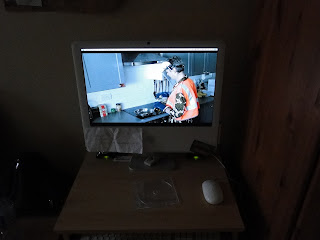 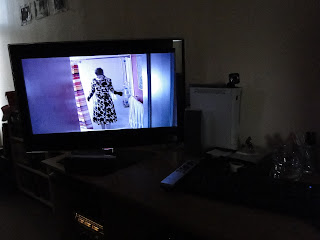 Sian Bonnell
Risk Assessed - Egg, 2007, Video
Risk Assessed - Bathroom, 2007, Video
Sian Bonnell is a UK based artist and curator and is Associate Professor of
photography at University College Falmouth. Educated at Chelsea School of Art and
Northumbria University, her work has been exhibited and published widely. Her last book Everyday dada was published in 2006 by Dewi Lewis Publishing. More recently, she was nominated for both the 2009 & 2010 Prix Pictet photography prize and her work is featured in the accompanying book Growth along with shortlisted and selected artists. Her work was also published this year in Auto Focus:The Contemporary Self Portrait, edited by Susan Bright (Thames & Hudson). Sian Bonnell’s work is in numerous private and public collections, notably, The Victoria & Albert Museum, London; Museum of Fine Arts, Houston, Texas; The Ransom Center, Austin, Texas; Bibliothèque Nationale, Paris. “Sian Bonnell’s current research involves a substantial investigation into belief, fear & anxiety found in communities throughout Western Europe. With particular emphasis on folklore, customs, superstitions and old wives tales and the histories surrounding them. Through this, she questions the role of the photograph in creating fictions and the role of the camera as conduit for the intentions of the photographer and both the visual and written contexts surrounding these.” 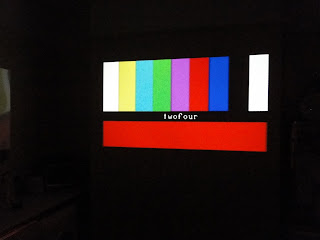 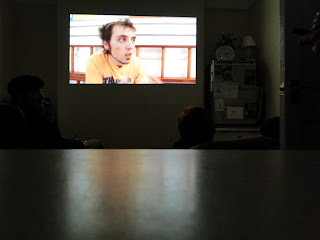 Richard DeDomenici
Fame Asylum, 2010, HD Video
MetaStatement
+++++++++
Since graduating with a first in Fine Art, Richard DeDomenici has produced, on average, a work of art every fortnight. This proliferation has borne some rich, radical and highly acclaimed fruit. From the Edinburgh Festival to the National Theatre – via Beijing, Iceland and New York – his performances have entertained, challenged and transformed.(1)
DeDomenici makes use of conceptual art tactics in combination with an
irreverent pop sensibility to critique and intervene in public behaviour and rhetoric.(2) His work disturbs normal perceptions through humour and confrontation outside of normal spaces.(3)
Hirsute and cute in a hazmat suit,(4) DeDomenici’s work is frank, amusing, insightful and at times inane.(5)
1. Shelley Warren, Arts Foundation Fellowship Award Programme, 2011
2. Dr Beth Hoffman, 'Liminal Norms and the ‘Normalisation of Deviance: Richard DeDomenici’s “Fame Asylum"'. University of California, Berkeley, 2009
3. Pierre Sauvageot, 'ViaEuropa Workbook: A Review For Artistic Creation in
European Public Space'. Lieux Publics, Centre National De Création, Marseilles, 2008
4. 'Acceptable in the 80s', QueerRoyale Blog, 2008
5. Sara Jane Bailes, 'Performance Theatre and the Poetics of Failure' Routledge, 2010
Richard DeDomenici is an Artsadmin associate artist
www.dedomenici.com 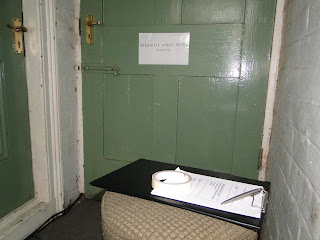 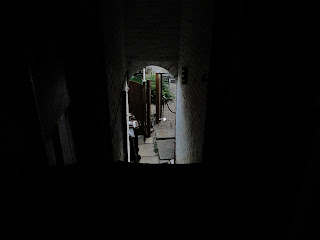 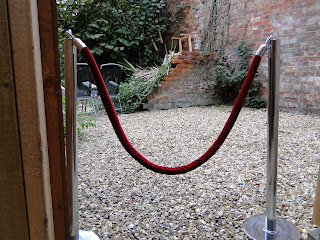 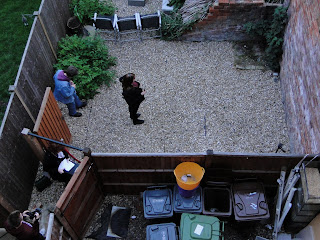 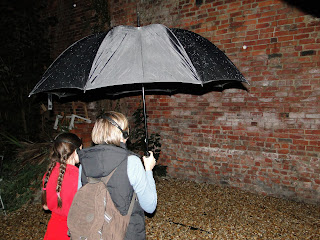 Laura Mahony
‘Mirabilis’, 2011, Mixed Media and Audio
I want my work to respond to the anti-institution ideals that The Monks Gallery adhere. The essential physics of exhibiting artwork in a house-come-gallery is for me, a piece in itself.
I intend to cordon off a specific area of the house with a red rope. A small cupboard or even a wardrobe would suffice, and will be documented as an art piece, highlighting and framing that section of the house/gallery. I will create an audio soundtrack to accompany the area, describing precisely everything that has gone into making it, how it works, how it comes across to the viewer etc.
My intentions are for the viewer to look at an area that would not normally be considered as art, unifying the radical intentions of the Monks Gallery and the art that is placed within it.
Posted by The Monks Gallery at 04:03